Cover Reveal: Until That Distant Day

I can hardly believe this day is here! I'm so excited to share with you the cover of my upcoming novel. I've had several of my old stories repackaged in recent years, but it's been a long time since I've had a new book published. And I've never before taken part in a cover reveal!

So without further delay, may I present the cover of Until That Distant Day: 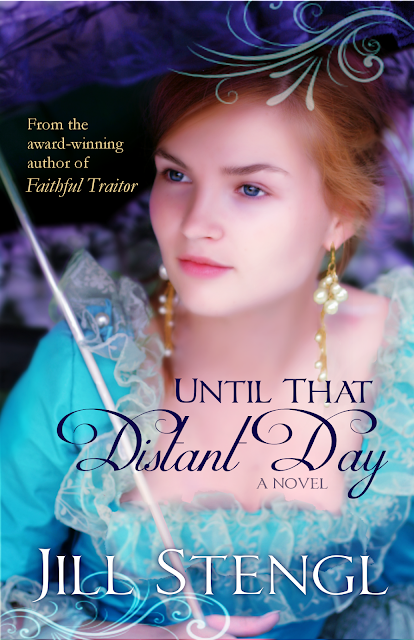 Colette DeMer and her brother Pascoe are two sides of the same coin, dependent upon one another in the tumultuous world of the new Republic. Together they labor with other leaders of the sans-culottes to ensure freedom for all the downtrodden men and women of France.

But then the popular uprisings turn bloody and the rhetoric proves false. Suddenly, Colette finds herself at odds with Pascoe and struggling to unite her fractured family against the lure of violence. Charged with protecting an innocent young woman and desperately afraid of losing one of her beloved brothers, Colette doesn’t know where to turn or whom to trust as the bloodshed creeps ever closer to home.
Until that distant day when peace returns to France, can she find the strength to defend her loved ones . . . even from one another?

This is easily the prettiest book cover I've ever had! I just love it.

I was born believing that the world was unfair and that I was the person to make it right.
One of my earliest memories is of Papa setting me atop a nail keg in the forge; I could not have been older than two at the time.
“Colette, give Papa a kiss,” he said, tapping his cheek.
“Why?”
“Come and sit on my knee.”
“Why?”
My response to every order was the same, asked with genuine curiosity. I did not understand why his watching friends chuckled. Why should I press my lips to Papa’s sweaty, prickly cheek? Why should I hop down from the keg, where he had just placed me, and run to sit on his knee, a most uncomfortable perch? I felt justified in requesting a reason for each abrupt order, yet he never bothered to give me one.
Mama, when thus questioned, provided an answer in the form of a sharp swat. This I could respect as definitive authority, although the reasoning behind it remained dubious.
My little brother Pascoe was born believing that the world was his to command. As soon as he acquired his first vocabulary word, “No,” he and I joined ranks in defiance of established authority.
Many impediments cluttered the path of destiny in those early years: parents, thirteen other siblings, physical ailments, and educational difficulties. And as we grew into adulthood, more serious matters intervened, even parting us for a time. But I will speak more of that later. For now, let me assure you that, no matter the obstacles thrown in our way, our sibling bond seemed indissoluble; the love between us remained unaffected by any outside relationship.
Pascoe and I were young adults when revolutionaries in Paris threw aside the tyranny of centuries and established a new government based on the Rights of Man. From the seclusion of our little village in Normandy we rejoiced over each battle fought and won; and when our local physician, Doctor Hilliard, who had first mentored then employed Pascoe for several years, was elected as deputy to the National Assembly from our district, a whole new world opened at our feet.
My story truly begins on a certain day in the spring of 1792, in the little domain I had made for myself in the kitchen at the back of Doctor Hilliard’s Paris house. Perhaps it wasn’t truly my domain, for it did not belong to me. I was merely the doctor’s housekeeper and could lay no real claim. Nevertheless, the kitchen was more mine than anything had ever been, and I loved that small, dark room; especially during the hours when sunlight slanted through the bubbled-glass kitchen windows, making bright, swirling shapes on the whitewashed walls, or each evening when I arranged my latest culinary creation on a platter and left it in the warming oven for the doctor to discover whenever he arrived home. That kitchen was my home. Not the home I had grown up in, but the home I had always craved.
On that particular day, however, it did not feel the safe haven I had always believed it to be. Loud voices drifted down from the upper floor where the doctor and Pascoe were in conference, disturbing my calm. When I closed the connecting door to the dining room, the angry voices drifted in through the open kitchen windows. I couldn’t close the windows; I might smother of heat. Yet I needed to block out the sound, to make it stop.
So I slipped a filet of sole into a greased skillet and let it brown until golden on both sides. The hiss and sizzle did not quite cover the shouting, but it helped. Then I slid the fish onto a waiting plate lined with sautéed vegetables fresh from my kitchen garden; and I topped all with an herbed wine-and-butter sauce. A grind of fresh pepper finished off my creation.
But my hands were still trembling, and I felt as if something inside me might fall to pieces.
Pascoe often shouted. Shouting was part of his fiery nature, a normal event. He shouted when he gave speeches at section meetings. He shouted about overcooked meals or inferior wines. He shouted when his lace jabot refused to fall into perfect folds.
But never before had I heard Doctor Hilliard raise his voice in anger.
Doctor Hilliard was never angry. Doctor Hilliard never displayed emotion. At most, he might indicate approval by the glance of a benevolent eye or disapprobation by the merest lift of a brow. Yet there could be no mistaking the two furious voices overhead. I well knew Pascoe’s sharp tenor with its sarcastic edge; but now I also heard the doctor’s resonant voice crackling with fury.
I managed to slide the hot plate into the warmer alongside a crusty loaf of bread and closed the door, using a doubled towel to protect my shaking hands.
Behind me the connecting door was flung open, and Pascoe burst in as I spun to face him. “Gather your things; we are leaving,” he growled. His eyes blazed in his pale face, and the jut of his jaw allowed for no questions. He clapped his tall hat on his head as he passed through the room.
I donned my bonnet and sabots and picked up my parasol. “What has happened?” I asked just above a whisper.
“I’ll tell you once we are away from this house.” His lips snapped tight. His chest heaved with emotion, and he grasped a portfolio so tightly that his fingers looked white.
I could not recall the last time I had seen my brother in such a rage.

Anne Elisabeth, my daughter and publicist, has created a blog button for my novel. Please feel free to share it on your blog and help me spread the word! 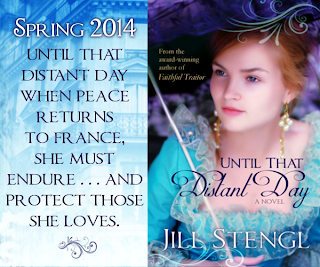 And this book has its very own blog page! Here is its address, where you can learn more about
Until That Distant Day and my other books: http://untilthatdistantdaynovel.blogspot.com/

I am also delighted to offer a bundle prize of ten print novels and novellas, including my award-winning Faithful Traitor, several novella collections, and my three-book Longtree series. These will all be autographed! (US and Canada only, please.)


If you would like to visit other hosts of this cover reveal, Anne Elisabeth is posting a list of them on her blog at: anneelisabethstengl.blogspot.com

Thank you so much for joining me today and sharing in the fun!